Literacy and education open opportunities for refugee women and mothers to build a better future and rise out of poverty. Strengthening the resilience, livelihood and equality of refugee women is at the heart of our work in Uganda.

As a result of the prolonged conflicts and increased unrest in the Democratic Republic of Congo, many Congolese people have been forced to leave their homes. Most of them seek protection in neighboring Uganda, which hosts the fourth-largest number of refugees out of all countries in the world. There are currently over 1.45 million refugees living in Uganda, more than 450 000 of whom come from the Democratic Republic of Congo.

56-year-old mother and grandmother Odeta Amina sits on a wooden bench in the courtyard of her small house in a refugee settlement in Uganda, peeling vegetables with her daughter Polina. Odeta’s grandchildren and little ducklings are running around in the yard. Odeta comes from the Democratic Republic of the Congo, but she and her family had to flee to Uganda due to continuous war and violence.

Odeta waited a long time for the violence in Congo to end, and she would not have wanted to leave her beloved home. However, the final decision to leave their home came when the rebels plundered the fortune of Odeta’s family. Odeta and her family fled near the Ugandan border, where they were forced to spend their nights without shelter, food, or the possibility of livelihood. The decision to leave was extremely difficult, but when Odeta and her family got to Uganda, she felt relieved. Odeta knew she had made the right decision, and her family was now safe.

“We lived in a state of fear and uncertainty for a long time, waiting for the situation to calm down, but to no avail. I didn’t see a safe future for us in Congo,” Odeta says.

When Odeta was a child, she never got into school. Odeta’s father died when she was still young, and her mother couldn’t afford to pay school fees for a family with many children. Like many other refugees living in Uganda, Odeta earns a living from farming. However, money is always tight. Now Odeta’s own children are young adults, and they have children of their own. Odeta and her husband both suffer from health problems, and it has become difficult to make a living out of agriculture.

“I want to take good care of my family. I hope that my children will have the opportunity to independent life and livelihood,” Odeta says. 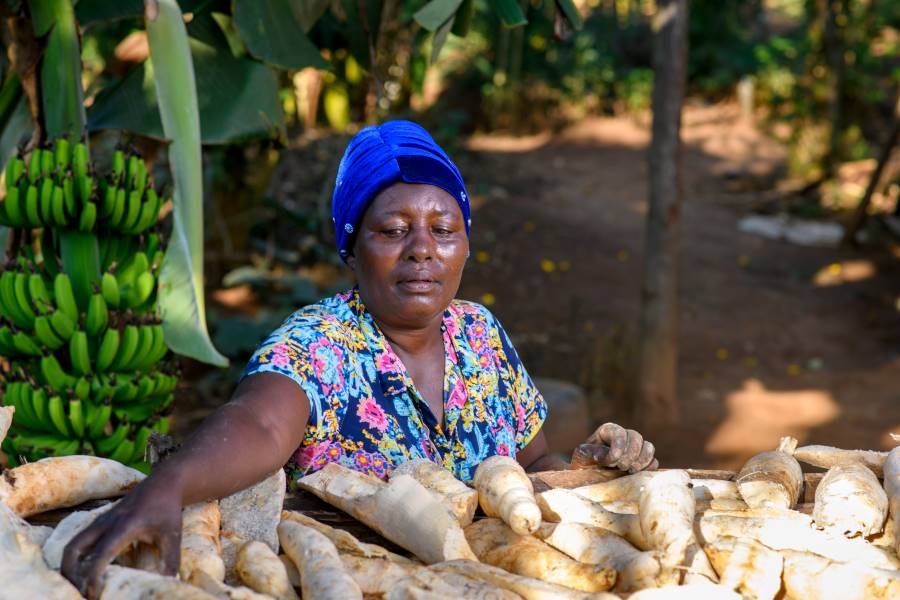 Education can open many opportunities for Odeta’s daughter and grandchildren that she herself never had. Strengthening women’s resilience and livelihood is at the heart of FRC’s trainings. The positive impact of education extends to the whole family and community over generations. Educated mothers and their children are healthier, they work more often and earn higher incomes, marry at a later age, and have fewer children. A literate mother can also encourage and support her children on their own school path.

Although Odeta’s family has been refugees for many generations, her dreams are like those of any mother: primarily, she wishes her children a bright future and a happy life. No parent wishes their child to face the horrors of war or persecution.

Read more about our work with refugee women in Uganda.

SUPPORT OUR WORK IN UGANDA

By donating to our work, you can ensure the continuity of our work with refugee women in Uganda and other operating countries.

Examples of how you can support refugee women’s education, livelihood, well-being, and human rights: